There are tell tale signs that can help detect active shooter scenarios before they happen. To learn the risk factors, please read Kathleen's article in this month's P&C 360 here: https://www.propertycasualty360.com/2018/04/16/how-businesses-can-prepare-for-active-shooters/ Prevention is the only solution.

The Killer in the Next Cubicle: The Tragedy of Workplace Violence in America

Rachael Birse lost her beloved brother Ryan to a bully co-worker on February 25, 2016. Ryan was working at his job at a KFC/Taco Bell restaurant in Elizabethtown, Kentucky when suddenly an older and larger in stature co-worker shot him multiple times, killing him. WVPI Founder Kathleen M. Bonczyk and Rachael Birse. Rachael was very close to her brother and was devastated by his loss. She misses him tremendously. After Ryan was murdered, Rachael committed her time and energie

Workplace and School-Based Bullying and Violence 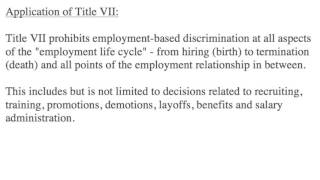 Harassment and bullying that occurs in the workplace and is motivated by the victim's protected class of race, color, sex, religion and/or national origin could potentially violate Title VII of the Civil Rights Act of 1964. Please watch the following brief video to learn more about Title VII:
1
2